We seem to have ben able to start to separate different ORIGAM features into modules or plugins. Example: Audit, Attachments, Chat.

Some of these consist only from model (e.g. Root package itself), some might include a frontend plugin (e.g. Audit) and some might include extra resources or even full stack (e.g. Chat which adds to the server, client and model).

So far we have been bundling everything in our main build. But we expect the community to create more add-ons. We ourselves want to modularise ORIGAM so one would not need to distribute the whole thing if only parts are needed.

If we want to make the distribution truly painless we have to introduce some kind of a packaging system, like NuGet or npm.

Using GitHub Packages for storage would be a good starting point as we wouldn’t have to provide our own infrastructure for the backend. 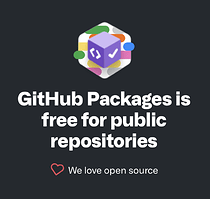 Which is great. We love open source, too.

For the client functionality I think we could use NuGet client.

For server deployment we could incorporate it into the custom Docker build. The procedure could be like this:

This DOCKERFILE would be a standard, so a developer could just run docker build and get his image.

This way we would get a custom docker which would contain all the dependent packages on all levels (model/backend/frontend).